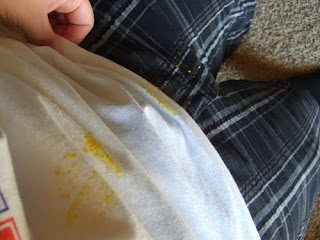 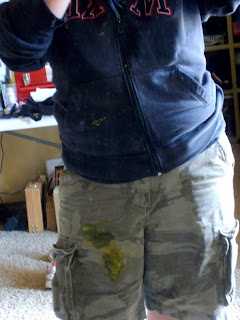 I decided then to keep, from that moment on, an extra layer between us. I refused to hold the little pooper unless she had a blanket under her. I think it was the next day (although it might have been the same day) that I had her lying on my bed, playing for a while before she was supposed to go to sleep. Fifteen minutes later I scooped her up to get her ready to sleep and felt wetness between her blanket and the one on my bed. "Oh well" I thought. It's just pee. It'll dry. Hard to keep my hygiene up when I've been getting pooped on as often as I have. No wonder Edyn calls me "Geeky" and "Icky".
spilled by Nikki around 1:33 PM