"Do you not realize I have had diarrhea since Easters?"

Easters. I mean... Easter. The holiday of eggs. What a scary, scary thought. Especially with a particular experience I had at work a few weeks ago still haunting my dreams. You get the privilege of hearing about it, since I think that sharing the experience might ease some of this burden for me.
So there I was at work, working hard (or hardly working... I can't really remember), when all of a sudden I am viciously attacked by a wretched smell that crept up into my nostrils without warning. I immediately breathed out the contaminated air, closed my airways and prayed for it to pass. What the heck?? That was nasty, and totally awkward for everyone around. And what's worse... it happened again about two minutes later. AND AGAIN another two minutes after that! On and off for twenty minutes the same thing kept happening, so I had time to consider (and reconsider) my options-- which I'm sure were the same for everyone else, including the perpetrator-- and the hypothetical consequences of those options.

Option 1. Start gagging and run out of the room, with eyes watering and my hand over my nose, either a) making some whimpering noises or b) mumbling some fake-cusses under my breath.

Consequence 1. The offender is unnecessarily overly-embarrassed and everyone at work realizes that I am immature and lacking in class and/or tact. I am shunned for the rest of the day by all but the offender, who will hate me for life.

Option 2. Look around to see if anyone else is also dying or perhaps looking guilty. Thinking of this option immediately put this picture into my mind (from Mean Girls... "he farts a lot"): 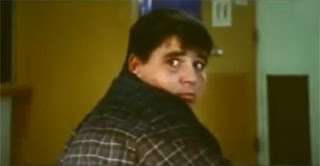 It makes sense at first to quietly look around, perhaps cluing the offender into the fact that he/she was not-so-sneaky in the release of certain bodily gases. He/she might get the hint and wait a few minutes, then take a trip to the bathroom or out the back door of the building instead of repeating the offense. Such is the consequence of Option 2 Tactic a. However, this feat is a tricky one, because should an attempt at this maneuver fail, you might find you have unintentionally pursued tactic b or c of Option 2, both of which have unfortunate consequences.

Option 2 Tactic b. You end up looking like the guy in the picture above (guilty), and/or overly confused as you glance around, leading others to mistake you for being the leaker. (I heard once that it's a sophisticated tactic to frame yourself... I'm not sure I believe that, or that it even makes sense.)

Option 2 Tactic c. You look a little too ticked and/or disgusted, turning the small incident into a large one, which is a known side effect of sloppy cover-ups. People assume you're trying to divert blame that is, in fact, yours.

Consequence 2. For Tactic a: the offender gets the hint and your co-workers praise your good deed. For Tactics b and c: you are shunned because people believe you are the offender. The real offender repeats the obscene and inconsiderate act (possibly more than once) and people hate you more and more each time since they think it's you.

Consequence 3a. Your coworkers think you have no sense of smell and envy you.

Consequence 3b. Your coworkers think you're the offender and are trying to ignore the situation away.

Consequence 3c. The offense is repeated and you suffer excessively on and off for the next twenty torturous minutes.

Option 4. Cover your nose with your t-shirt and wait until the offender leaves.

Consequence 4. People know it's not you and the offender gets the hint--unless it turns out to be the guy sitting behind you, who couldn't see you covering your nose and who ended up leaving twenty minutes after the first offense... with his noxious fumes trailing behind. Yes. I chose Option 4. And yes, I am very afraid for any smells I might possibly be bombarded with at work tomorrow morning. Maybe I'll take a nose plug... just in case.

spilled by Nikki around 5:33 PM

I just watched that movie and laughed out loud about the fart guy!
Okay, so what did you do? Who was it? Is that why you wrote "shunned" on your Facebook wall? You picked the wrong tactic, didn't you?

Yes, tell us which option you chose and which consequence resulted. I feel very sorry for your diar(reah)circumstances...

Doesn't the blog clearly state that you chose option 4? How come everyone is confused about that.
I'm glad you didn't pick 2. I wouldn't want you to look like the Mean Girls farter guy.
By the way...this is a very random thing to blog about for not having blogged in like...half a year. You chose this topic over California!!! I want CA pictures! :)

Option 4?!?!? No guts not glory! You deserve what you get! (I would have probably gagged and fell over on the floor nearly dead, then when I recoverered, ran off!)

Haha. I got distracted when I was finishing the post and didn't put which option I chose... and didn't even tell about Easter or anything. :) But I added the option I chose and might do another post once finals are over...

Oh. I haven't died yet. I guess I'm not the only one who didn't eat eggs. Phew!

do you even realize how much this post offended me? I can't even say the *word* you speak of...let alone read an entire post about it. :)
p.s. this was hilarious