All I wanna do is *bang, bang, bang, bang!* and *cha-ching!* and take your money.
Tiff, Steven, Brown and I took a stroll down to Caswells for some shooting. We started out small-- a little gun with little bullets and a little kick from twenty feet away. We all did ok with Steven's help. :) 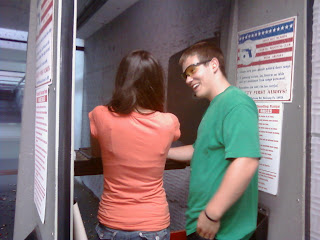 We traded the little gun out for a bigger one with a stronger kick. Slightly scary at first, but pretty fun to shoot! We had to go to the counter about a million times for different supplies or targets or whatever--I felt a little too needy but the guys working there were cool. Here's one of my silhouettes. The eight shots in the chest area were from 45 feet away and the three in the head and two strays were from fifty feet! Woohoo! Not too shabby for my first time. Poor Tiff, though. Let's just say that there was a forty-five percent chance she'd hit the silhouette... from twenty feet. :P 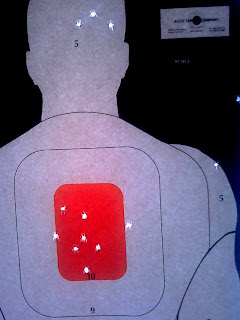 spilled by Nikki around 5:43 PM

I am officially creeped. I lived with you for a year, not knowing full well what you were capable of.