Every year Mom and Dad warn us that Christmas is going to be skimpy. But you know what? In years past it never has been. This year was different, though, because it almost really was. The following picture (taken at approximately 11:00 PM Christmas Eve) may disturb young or sensitive viewers. 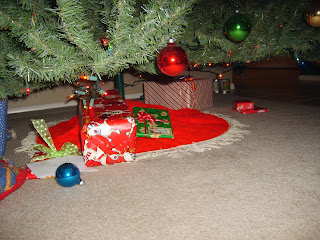 That's right. There were, like, five and a half presents under the tree just an hour before Christmas. And you see that blue and red thing on the left side there? You know, next to the fallen Christmas tree ornament? That's part of a fallen-over nativity scene. Pretty dang ghetto. But then Santa came and five hours later there was shredded up wrapping paper and opened presents all over the place! He must have really liked the note and cookies we left for him. Here's a picture of it... 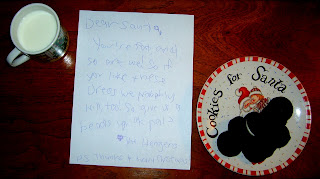 It's kind of hard to tell, but we left him Oreos and milk. The note said "Dear Santa, You're fat and so are we! So if you like these Oreos we probably will, too. So give us a heads up, ok pal? (heart) the Hengens P.S. Thanks and Merry Christmas!" When I wrote the note I thought we were still giving him some of the peppermint Oreos that none of us had tried yet. I guess we ended up saving them for Mom, Tiffani, Crystal and Steven's friends instead. Oh well. Santa seemed ok with it.

My favorite present was probably the one from Steven, who drew my name for sibling presents. To my wonder, and surprise, I opened my gift to find my very own copy of The Dark Knight! 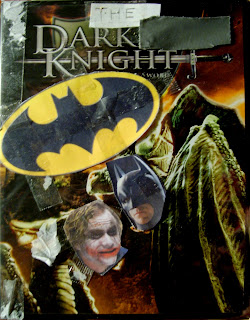 With a little duct tape, double sided tape and a few pictures, Steven transformed a New Zealand tv-show-turned-to-movie (The Darkest Knight 3) into the movie I most hoped to get for Christmas! What a great guy. Especially since a deluxe edition (with bat helmet included!) of the real Dark Knight was in the bottom of the gift bag.

Since I was able to get sweet presents, be with my family, and safely fly to Utah for a couple of very happy, yet very sad, days I would say that it was an overall happy and bountiful Christmas.

Ha Ha ha! This blog made me laugh for like 3 hours. I think I'll boycott showering and changing my clothing because I liked it so much!