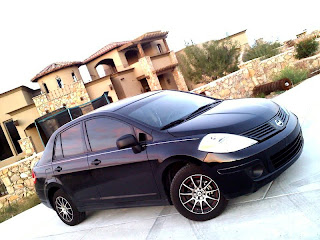 A little about "Night Fury" though:
It's a black (obviously) 2009 Nissan Versa with white racing stripes.
It came with alloy wheels and an aftermarket stereo (I'll be getting a sub woofer at some point in the future, I'm sure...).
It's manual, and has been averaging 35mpg city. I haven't done any road trips yet, but I'm guessing it'll get about 40mpg freeway.
It's short and squatty (like me!).
I love it.
spilled by Nikki around 5:17 PM

And road trip to salt lake!! I vote yes.

That is a great photo!