the passing of a dear friend... 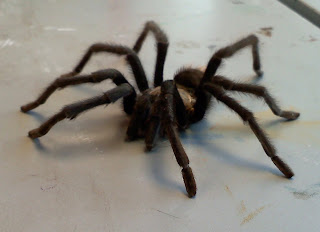 He's a tarantula. Natalie and I, with the help of one of our professors, caught him at the base of Provo Canyon (we were on our way home from a plein air expedition). We lured Little Dave into an A&W cup-- a surprisingly easy task-- and I took him home. He died later that night... right around the time I became a murderer. For me it was a costly lesson concerning the repercussions of succumbing to peer pressure. I still regret my foolish decision. Little Dave's burial will be taking place sometime in the next few days, now that rigor mortis has completely consumed his body and the decomposition of the same is causing an unpleasant odor in the vicinity of my studio space. He will be sorely, sorely missed. Rest in peace, my hairy little friend.

POST SCRIPT--added due to popular demand
We (meaning Natalie and I) gave Little Dave his proper burial last week. We placed him in a small, black box with a pirate-esque tarantula flag at the head. We cushioned the inside with tissues and lined the edges with matches. We lit the matches as the eulogy (you-goo-ga-lee) began, then set him afloat the botany pond. Once his body was reduced to ashes, we removed him from the pond and buried him nearby. It was an emotional time, but I'm confident that it enabled his spirit to move on...
spilled by Nikki around 8:41 PM

That's awesome Nik! I'm so proud of your thoroughness.