Last Winter I enrolled in "Greek and Roman Mythology," in an attempt to fill my letters credit. I walked into class the first day, feeling ambitious. I talked to my neighbor for a few minutes and thought "she and I are going to be great friends." The teacher passed out the syllabus and began going over requirements for the course. I dropped the class almost before the hour was up. The same thing happened with "Humanities of Asia" last semester, except I think it took even less time for me to drop it.
This semester I enrolled in "Masterpieces of English Literature," which turned out to really be "Masterpieces of British Literature." Yes, we read such classic and ever-so enlightening tales as Beowulf and The Faerie Queene. (And by "we read" I really do mean that we read them. Including me.) I HAD to take the class if I wanted this to be my last semester, and I did want it to be my last. So I took it. My one and only goal for the class? To get a "D" letter grade (the minimum grade required for the class in order for me to graduate). I took my final today, and I know you're wondering whether I met my goal. The answer is no, no I did not.
Instead, to my dismay, my calculator reported that even if I were to get a zero on both my final paper and in-class final I would still get a 68.6% in the class. What's worse, I got my paper back right before I took my final, and I got a 94% on it. There was no way I could get less than a 78% in the class, even if I got a zero on my in-class final. FAIL.
spilled by Nikki around 4:04 PM 1 comment:

I was trying to think of things I've been doing lately so I could blog about them. It's pretty much been school, school and more school. Filling in some of the cracks between the 'school' and 'school' part has been my friend, Natalie. She's in my major, and her desk is on the other side of mine in the studio. She's at school a lot, too, so I see her more often than pretty much anyone. She's almost all I do all day. Anyway, in celebration of our BFA shows going up we went to sushi a little while ago. It was delicious. But then we started getting full. And we were afraid of being charged for any sushi we didn't finish. So we started arguing over who had to finish off what. Finally we got it down to two pieces. I choked down one, and she... well... 'took care' of the other one. 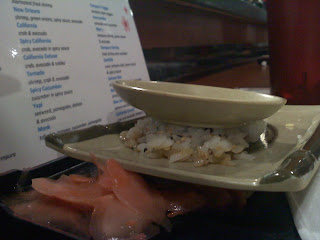 Yeah. She's that awesome.
spilled by Nikki around 4:53 PM No comments:

I'm graduating soon--did you know? I want to do some fun stuff before I start the rest of my life and this is what I have so far:

1. Drive my stuff down to New Mexico with my buddy Natalie. It's fifteen hours, but she's totally game. Already you know everything there is to know about her: a. She's an awesome friend b. I think she's great c. She must think I'm great too d. She's crazy. And yeah.

2. Go to the hospital to see the newest Heiner baby! If that baby waits to come until after I've left for #4... she's gonna have some serious explaining to do. I keep missing the Heiner kids being babies and dangit! It's not gonna happen again.

3. Spend about two weeks with Bonnie and Asher (and maybe Ian??) in Henschtal. Well, and touring around, of course. :) I'm very much excited for this one. We're supposedly making/finalizing plans soon... as soon as I get the rest of my stuff done so I can actually graduate. Asher is so stinking cute! Essentially my nephew, too. I love all three of those kids.

4. Do something adventurous with Stephanie, since she's also graduating.
Steven and I went skydiving for his graduation and what should have been mine (if I had been on-top of things enough to graduate in four years instead of five), so that's out. Also, Stephanie is being a little lame, so anything TOO wild is out of the picture anyway. I mean, she suggested driving all the way back up here just to go to Lagoon. Wait... seriously? She's going to be living here for the next four years. She can go then. Also, if she wants to travel why didn't she think to suggest Disneyland or Knott's Berry Farm or the beach or something? That whole area of California is four hours closer and way cooler! I think she might just think it would be too overwhelmingly fun. So. Have any suggestions for us? Besides horseback riding in exotic Mesa, please. I've already eliminated that option too. I'm thinking more along the lines of 'see a movie.'

5. Begin the rest of my life in Cruces. Someday the 'as a fish-lady' part will be added on. But not yet. Once I get my own place. First I hafta take over Cruces.... I will rule that tiny town!
spilled by Nikki around 4:22 PM 1 comment: