I have been whining about snow ever since the first flake fell this school year. But, on my half birthday, Tiffani was all pushing me in the snow and crap on the way home from school. As cruel as it was for her to do that, it broke the barrier I had put up between myself and snow. Later that day, Tanisha and Michelle wanted to go make a snowman. I resisted at first, but then they suggested a snow cow. I was secretly very excited. :) So, we went outside and got busy. It was hard work, and it seemed like no one had faith in our abilities--they all snickered when we answered the question of the night: "What IS that?" However, the snow cow was born. 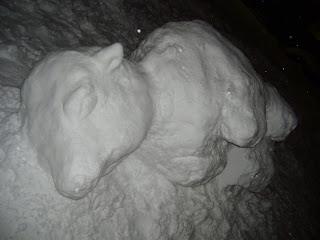 Lynyrd Skynyrd, the "tipped" heifer, graced the otherwise bland and monotonous courtyard of Liberty Square for all of two days before some unknown, jealous vandalizers destroyed her. There wasn't a chunk of snow bigger than a softball remaining. Her name came from the brand "LS" that was on her butt. (Really it stood for "Liberty Square" since we all love to hate Liberty.) I had the privilege of working on her head, and Tiffani later joined us and created her stump legs. 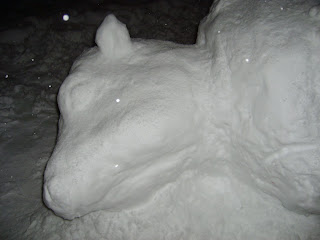 She turned out okay, but in the end we all decided she was shaped more like a buffalo (that led to the removal of her udders). To give you an idea of her size, here is a picture of two cows--one living and one the model for her-- on top of her. 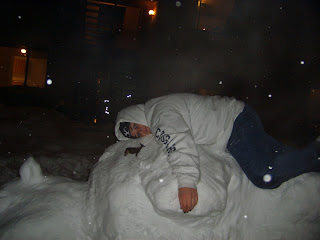