PROBLEM
Little Dave's passing was a tragedy. "...but it's not just tragedy, it's dementia, despair; it's this hole...in each of [my] eyes, where all the events that happen in this real world kind of just fall through. It's loneliness in it's most crippling form, the kind that no amount of love, or human contact, could ever mend... [I need] to try to fill those holes with something else. But with what? Hope? I can try to fill those holes with drugs, soothing words, but that's all. I hope [my] wounds will heal with time, but right now, things aren't looking good." Ok. That was a tad dramatic. But I DID need something to mend my broken, guilt-ridden heart. So where did I turn to fill the void? PetSmart, of course. Time to right my wrong.

SOLUTION
Simini was dying for a fish, and it turns out she's quite picky-- especially when it comes to her water-dwelling friends. We browsed the fish area for quite a long while, sizing up the fish based on recommended tank size, price, and aesthetic appeal. It was then that I spotted the magical tank... a tank containing underwater frogs! We couldn't see any in the tank, so we called a worker over and asked whether they were out of stock. She proceeded to stick her arm into the germ/scum/poop/dead fish/nastiness infested tank and grab the large rock structure resting at the bottom. She waved it around viciously, knocking into fish (and prolly knocking several unconcious) and stirring up roundabouts of 15 little frogs. I was excited for the .7 seconds it took before I realized that 13 of the 15 frogs weren't moving of their own accord. I'd never seen so many dead frogs. Simini and I exchanged horrified looks right before the worker set the rock structure down and walked away, leaving us to stare at the dead frogs and then notice that one of the two living ones had been pinned under the rock structure and was struggling to escape! We panicked for a moment. I don't know what Simini was thinking at the time, but I was trying to decide whether to call back the heartless, germ-loving worker or to stick my own precious arm into the nastiness to save the frog from his seemingly eminent death. I opted to call back the worker. Or was it Simini who did? It's all a blur... anyway. She came back and freed the poor dear and that's when I decided that I needed to save one of those poor creatures. I considered it a step towards fully repenting of the wrong I did Little Dave. Simini picked a guppy, we hunted for the best food (which included frozen bloodworms for the frog.... yum!), water conditioner and tank decor, then headed back to the studio with our new friends.

HAPPY ENDING
We made a very nice little place for our buddies to live. They sit on the window sill right next to my desk, overlooking Y mountain, among other things. The first few days neither moved much; they seemed a little depressed. Or scarred, perhaps. Eventually, though, there was noticeable improvement in their health and stamina. Because the decor of choice for the tank was an island accompanied by blue tank rocks, Simini suggested we give them island names. We settled on Lilo for the guppy (a male, we later verified) and Stitch for the frog. They are quite active and happy, and everyone in the studio loves them. Stitch, who sat in the exact same spot his first two days in the studio, now moves around freely. Sometimes he hides under the palm tree's branches, or swims around then freezes mid-action, floating along stiff in the middle of the tank... it kinda looks like he's rehearsing for an underwater Matrix movie. Anyway. Here's a tender picture of Stitch (Lilo is a bit harder to catch sitting still): 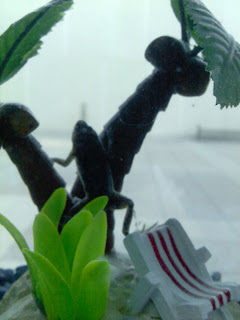 NEW PROBLEM
Simini also got a betta fish for her house that day. He died three (or was it two?) days later, so we got her another one. The new one-- Richt (pronounced Rick and short for Xyrichtus) fell sick recently and we returned to PetSmart to get him some meds. Of all the times I've been to PetSmart, that was the first time they had pythons in stock... and I wanted one. Kind of a lot. I've wanted a snake ever since high school. All my former roommates were strongly against the idea of me owning a snake while living with them. However, I think I'm moving next semester, and my will-be roommate is cool enough that she'd be ok with me owning a snake. Now I just have to figure out whether I can afford it and whether I can make that kind of commitment. And keep the poor thing alive... stay tuned to find out how that all goes.
spilled by Nikki around 9:56 PM

Thank you. That's the nicest thing you've ever said. I love you. (Reach out and touch each other...)

I am very glad you posted this.

A-I am very cool, despite my acceptance of snakes. Probably the coolest roommate ever.
B-Omi started it all!! Just think-all of these water creatures might not have had homes to go to if we hadn't purchased that first beautiful, blue and red beta. Thanks for saving that little froggie! :)

I would just like to post here officially that nursed Rick back to health and he is doing just swimmingly. It was a tough time, but I think we are the stronger for it.

Any offer I have made previously of you living with me or near me will be revoked if you bring any friend of Dave's or ANYTHING resembling a snake to my home.

You can play all day long in the aroyo in our yard. You will find many amazing creatures OUT there- operative word- OUT. that is where they should stay.

I knew one day you guys would return to mini frogs after the tragic days of your youth!